So I real­ized recent­ly that I nev­er made a blog post about the fire that hap­pened behind our house. Mobile home fires are com­mon, but this was the first time it was so very close to us…and the first time the same house caught fire twice.

Amy and I were com­ing home from the Gym a lit­tle after 8 a.m. on Decem­ber 16 (my mom’s birth­day) and she noticed a “bon­fire” smell. I told her some­one was prob­a­bly hav­ing a bon­fire (some­thing else com­mon in mobile home com­mu­ni­ties). She dropped me off and picked up our old­est to take her to school. I had just Riley in the house with me then. I went back to my office to do a few things before going to bed.

Amy called me a few min­utes lat­er and said that I bet­ter check out the back win­dow and see what’s going on, because she had to stop twice on the frontage road to let police cars fly by her and whip down Lib­er­ty Lane (the next street over from us and behind our home). The con­ver­sa­tion went like this:

“Why both­er? I’m not going to be able to see any­thing anyways.” 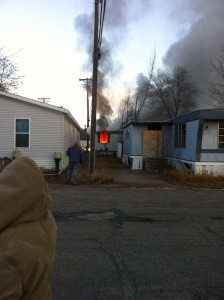 I look out my win­dow as I am talk­ing to her and I see police cars every­where. I turn slight­ly to my right and look at a blue dou­ble-wide that is behind and off to the right of my back win­dow (8 feet to be exact, cor­ner to corner)….and I see flames shoot­ing out the window.

I yelled into the phone, “HOLY $H1T! The blue house behind us is on fire!”

Amy replies, “You can see the fire?”

“It’s shoot­ing out the back win­dow of their house!” I reply

“Get the kids and get the HELL OUT OF THERE! I am on my way back” Amy yells and then hangs up. (We had our nieces and nephew being dropped off soon and she thought they were there already)

Amy was on Lovell Road and whipped a U‑turn going like 40–45 mph. Court­ney hangs on for dear life.

I start run­ning through the house, yelling for Riley to get his shoes on, there is a fire and we have to get out of the house. He com­plains that he does­n’t have socks on (that kid and his socks) and I yell at him to “Get your damn shoes on!” (I don’t think or speak well when I am under that kind of pressure….)

I think to get the dog’s leash on him and grab him and Riley and our coats. The cats (and tur­tle) will have to fend for them­selves as I can’t grab them all at once and I did­n’t have a whole lot of time. (We were afraid they were all in the back bath­room, but we found out lat­er they were all in dif­fer­ent areas of the house…two were way up in the front sleep­ing the whole time)

Amy comes whip­ping in, Court­ney storms up the stairs and grabs the dog and we get into the car and park across the street. The whole neigh­bor­hood comes over to watch and talk….all while smok­ing cigarettes….

We’re all freaked out, because Mobile Home fires have a ten­den­cy to “trav­el” like a for­est fire, because homes are so close to each other…we were also afraid that the blue home next to our (which is MUCH clos­er) could catch fire…then we would have been screwed, as that house is aban­doned and there is a lot of junk in that house. It’s a fire hazard.

We called my mom at work, on her birth­day, to give her a birth­day present…a near heart attack. I post fran­ti­cal­ly on Face­book to alert every­one of what’s going on.

The fire is final­ly put out about two hours lat­er(?) and every­one dis­pers­es. Our state­ments are tak­en. We go into the house and real­ize that we can’t smell any smoke….which told us we don’t have any drafts!

I head to bed as I have “Knit­ter­ven­tion” that night and we com­ment that if I had­n’t stayed up…I would have still been asleep, I would­n’t have heard the police­man bang on my door (or the dog bark­ing) as once I am out, I am dead to the world and Amy would­n’t have known until she came back.

Amy says the fire­man did­n’t clear out for a few hours after. Rumors was that it was the lint in the dry­er that caught fire (but they always say that with mobile homes…) Amy said it looked like it start­ed in the elec­tri­cal box, because you could see the box and it was total­ly scorched, but the dry­er exhaust area did­n’t look as scorched.)

So jump a few hours lat­er, after knittervention.

My mom and I are on our way back from the open knit a lit­tle after 10pm and we turn to dri­ve down our street and I see smoke bil­low­ing across the street…I thought at first that it was fog…then I look over in my hous­es direc­tion and I see a smoke plume just rising…I tell my mom to step on it and as we pass by the house next to us, I can see flames shoot­ing out the side window…I scream at her that “It’s the same [email protected] house on fire!” and she whips into the dri­ve­way (which amazed me, cause she is kin­da pokey.)

Our neigh­bor Wendy was already com­ing down the street on her phone (call­ing 911). I jump out of the car before it’s done mov­ing and storm up the steps….stop to enter in my code….then storm into the house scream­ing for every­one to get out, the same house is on fire.

Amy was in her night­gown lay­ing on the couch, Mikay­la and her best friend were loung­ing half-asleep in the liv­ing room. Dominic was asleep in his bed and Riley was somewhere.

Amy throws on some pants, gets the kids togeth­er (It took a bit to wake up Dominic and get Mikay­la’s bestie mov­ing). Cindy comes in and grabs the dog and we get the kids and every­one across the street.

By this time the police­man are here and going around evac­u­at­ing the hous­es again, and we run back in (while they are on the oth­er side) and grab our cats this time (some of our neigh­bors helped us get them out of the house and into the car.)

This time it took until about 1–2am until they had the fire com­plete­ly out. They tore out the back to walls to make sure. Our good neigh­bors the Pic­tons, and Kip­py, stayed with us and Kip­py made us hot cocoa to keep us warm (it was get­ting quite cold out). I stayed up most of the night on “fire watch” to make sure noth­ing else hap­pened. Every­one fig­ured it was a rekindle….until…..

The next morn­ing Amy is assess­ing our dam­age and comes across this lit­tle lighter in our yard, with parts of it strewn about, like some­one was dis­sem­bling it as they ran. She called the police.

They came out and said it looked like a home­made blow torch. Amy start­ed fill­ing them in on all the stuff that has been hap­pen­ing around our area (kids shut­ting of the main switch on our elec­tri­cal pedestal–which shuts off all pow­er to our house–around mid­night when I would be gone for work, turn­ing on our out­side water in the mid­dle of the night, tak­ing their lighters to our sid­ing and mak­ing scorch marks, hang­ing out in the emp­ty lot (and break­ing into the house) next door and smoking…and pos­si­bly doing oth­er drugs.). As she is telling him this, he goes over and moves some skirting…there are a few alco­hol bot­tles, with tow­els tucked into them, with scorch marks….they were mak­ing molo­tov cocktails.

So now the rumor is pos­si­ble arson for the sec­ond fire. (We have a home a few streets over that is labeled as arson…they caught that per­son I believe.

So that was my mom’s fun excit­ing birth­day and how a house catch­es fire twice in one day…and freaks out the Jones family.

This entry was posted in Home and tagged house fire. Bookmark the permalink.